Bitcoin payments startup Fold App has announced the closure of its seed funding round in which venture firms such as CoinShares, Slow Ventures, and Craft Ventures took part. The company raised $2.5 million.

In addition, the company announced on Wednesday the launch of a new mobile application to be used for mobile payments of Bitcoin through the Lightning Network, a second later application built to help scale Bitcoin. The new application will also allow Fold App users to purchase Bitcoin using credit and debit cards straight to their bitcoin wallets.

However, the best part about the new application has to be the cash-back feature which allows users to receive cashback in the form of Bitcoin for payments made through the app when shopping in supported retail stores.

“Our new app gets you cashback in bitcoin and keeps your data private when you shop at retailers– this is great news for any fan of bitcoin, privacy or free money,” said Fold CEO Will Reeves. “We are especially excited because Fold also marks the first payment and rewards application to use bitcoin’s lightning network, which makes using bitcoin instant and nearly seamless.” 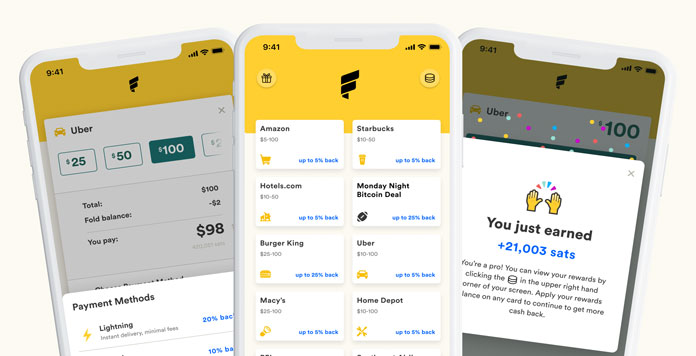 The privacy feature that Reeves is referencing in the above statement works this way: Fold App processes all the transactions on behalf of the client. So in the case that a user is making a purchase from a retailer, the card issuer, such as MasterCard will only see a payment made to the Fold App while on the other hand, the retailer will see a payment received from Fold. It’s partial anonymity but it’s a welcome feature for users who have come to appreciate the pseudonymity features of public blockchains such as Bitcoin – whatever privacy they can get they take it.

“You can think of Fold as an incognito mode for payment—we give you a burner payment code to use at retailers that lets you avoid sharing personal and payment details,” Reeves explained.

The cashback to bitcoin feature is not a novelty introduced by Fold App. This is because some other applications have done the same such as Lolli raised funds to the tune of $2.25 million from investors including the Digital Currency Group and Bain Capital Ventures to offer a rebate program similar to Fold App’s. Lolli partnered with leading American grocery chain Safeway and Pet Company in order to give back their shoppers 3.5% of their expenses in the form of Bitcoin.