It’s all about the quest for decentralization and efficiency, and Ripple Inc., seems to be on the right path. In their drive towards creating a seamless and cheap experience in global remittance, they are reportedly merging xRapid, the option that incorporates XRP, xCurrent, the end-to-end messaging platform with encryption capabilities, and xVia into RippleNet.

The product offering was announced on Oct 9, and amongst the changes, xRapid customers, instead of purchasing the product would instead use the On-demand liquidity provided by XRP, the native currency of Ripple.

On the other hand, customers would connect to the RippleNet instead of buying xCurrent or xVia separately. Few changes accompanied this product offering, Ripple said, and the move is part of a natural evolution given the increasing user base, and their move to create a standard.

Ripple Inc, in part of their independence from Ripple Labs, the official issuer of XRP, are decentralizing and shifting towards allowing market forces to influence the prices of the third most valuable digital asset. This, according to Brad Garlinghouse, in a recent interview with Pompliano, has opened up the company to attack stemming from a bunch of misinformation.

Meanwhile, Xpring now has a strategic partnership with BRD, a mobile wallet provider, in their bid to boost XRP adoption.

To that end, they are sinking in $750,000, in their bid to build an internet of value that will ultimately allow BRD wallet users to “to hold, buy, sell and send XRP to anyone in the world.” 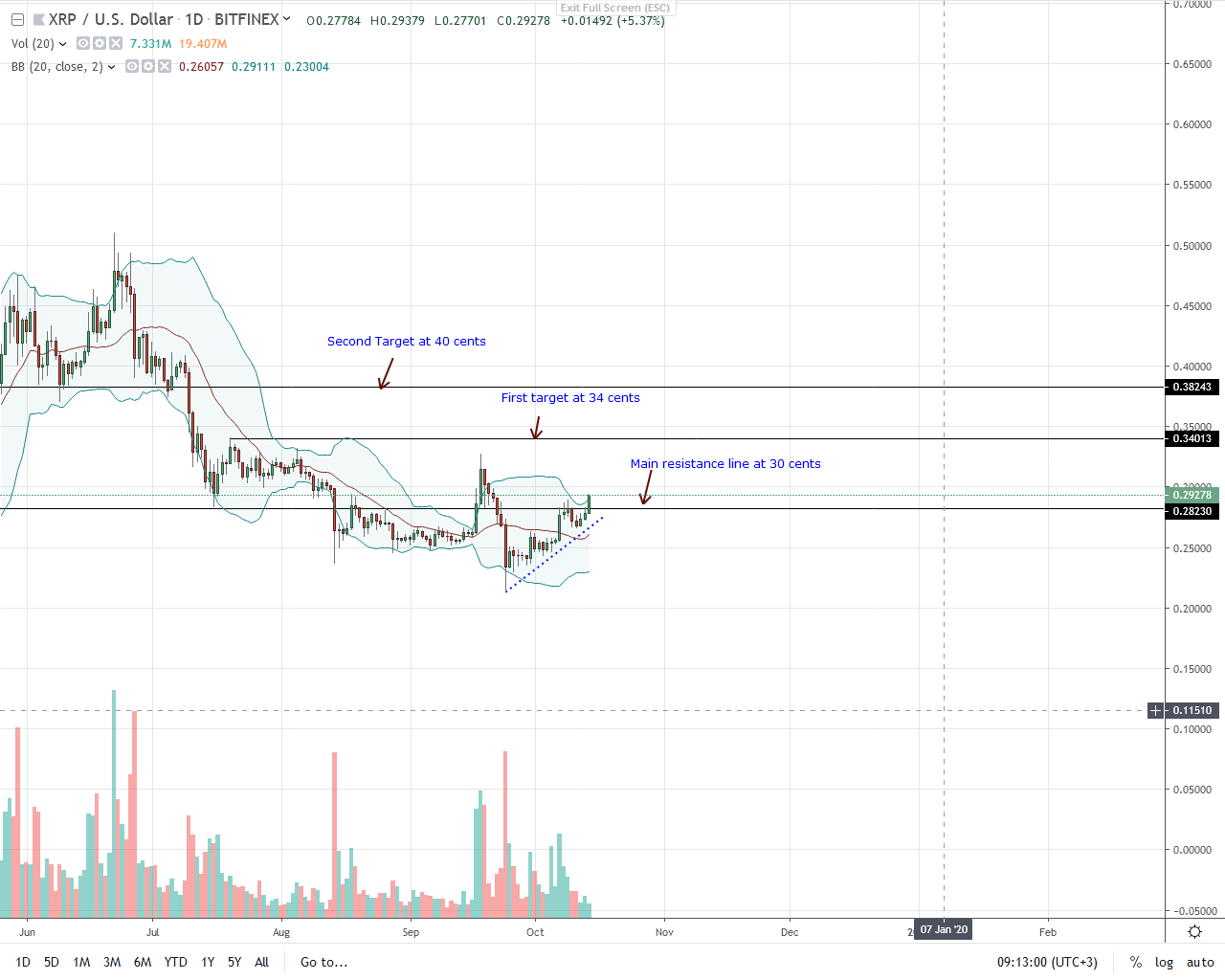 It has been a stellar week for XRP. Week-to-date, the coin is up 8.6 percent, 1.6 percent and 1.2 percent respectively against USD, BTC and ETH. Considering the steep losses of Q3 2019, this is impressive. At spot rates, bulls are back and trending above the main resistance trend line at around 29-30 cents.

Mentioned in previous XRP/USD price analysis, the best course of action for traders is to either wait for an uptick of trading volumes-ideally above $82 million of Sep 24, and a sharp up-thrust above and sustenance of price above 30 cents before loading on dips with first target at 34 cents and later 40 cents, or buy at spot rates.

If the latter is the case, fitting stop loss order(s) should be anywhere between 24 cents and 26 cents, or just below the immediate support trend line. Any resistance from spot level accompanied with high trading volumes could signal the emergence of sellers and a probable drop to Q2 2019 lows of 21 cents.