InputOutput Hong Kong (IOHK), based in Cheyenne WY, is the developer of the Cardano Blockchain 3.0 and the ADA cryptocurrency. The Cardano platform is the first designed and built to academic and scientific standards; additionally, the technically advanced blockchain is peer-reviewed by academia, audited by a third-party, and features a provably secure Proof of Stake (PoS) algorithm.

The IOHK organization has an exceptional team to support their mission to advance blockchain technology for the greater good, including an astounding 25+/- researchers and engineers with PhD's; additionally, there are numerous other talented team-members with MSc degrees, multiple degrees, and many years of experience. Click to view all: IOHK Team Members 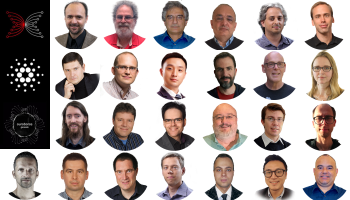 Prof. Emilios Avgouleas, PhD, Senior Research Fellow
Dr. Emilios Avgouleas holds the International Banking Law and Finance Chair at the University of Edinburgh, and is the founding director of the Edinburgh LLM in International Banking Law and Finance; he has a PhD from the London School of Economics and has also held (or is invited to hold) a number of visiting posts with other leading academic institutions, including Duke University, the University of Hong Kong, Harvard University, and Yale Law School.

Prof. Roman Oliynykov, PhD, Research Fellow
Dr. Roman Oliynykov is a Ukrainian cryptographer, IT security researcher and lecturer. He graduated from Kharkiv National University of Radioelectronics in Ukraine in computer engineering and security; his PhD is in symmetric cryptography.

Peter Gaži, PhD, Research Fellow
Dr. Peter Gaži did his master studies in computer science at Comenius University in Bratislava, and obtained his PhD in cryptography from ETH Zurich under the supervision of Ueli Maurer. Later he worked as a postdoctoral researcher in the cryptography research group of Krzysztof Pietrzak at the Institute of Science and Technology in Austria.

Markulf Kohlweiss, PhD, Research Fellow
Dr. Markulf Kohlweiss is Senior Lecturer in the Security and Privacy research group at the University of Edinburgh: he holds a PhD in cryptography from the KU Leuven and was a researcher at Microsoft Research Cambridge in the Programming Principles and Tools group.

Nikos Karagiannidis, PhD, Research Fellow
Dr. Nikos Karagiannidis is a data management and database expert with a strong research background and a PhD in computer science and databases from the National Technical University of Athens, acquired under the supervision of eminent data scientist Professor Timos Sellis.

Mirjam Wester, PhD, Senior Research Manager
Dr. Mirjam Wester worked as a research scientist for 20 years in the field of speech technology; she has a PhD from Radboud University in the Netherlands in automatic speech recognition and was a research fellow at the University of Edinburgh for 13 years.

Duncan Coutts, PhD, Int'l Director of Engineering
Dr. Duncan Coutts is a computer scientist and a Haskell consultant and community member; he holds a BSc and a PhD in computer science from the Univ. of Oxford, he has been using Haskell for nearly 20 years.

Lars Brünjes, PhD, Director of Education
Dr. Lars Brünjes holds a PhD in pure mathematics from the University of Regensburg in Germany. After a postdoctoral year at the University of Cambridge in the UK and several years of research and teaching at Regensburg, he spent a decade working as a lead software architect on mathematical optimization software and web applications for an international IT company.

Neil Davies, PhD, C.Eng, CITP, System Performance Scientist
Dr. Neil Davies is an expert in resolving the practical and theoretical challenges of large-scale distributed and high-performance computing. He is a computer scientist, mathematician and hands-on software developer with a PhD from the Univ. of Bristol.

Manuel Chakravarty, PhD, Language Architect
Dr. Manuel Chakravarty is a researcher and developer specialising in programming languages and compilers with a focus on functional programming; he was an associate professor at UNSW Sydney, holds a PhD from the Technical University of Berlin, and received an MSc from Karlsruhe Institute of Technology.

Pawel Jakubas, PhD, Haskell Developer
Dr. Pawel Jakubas has an MSc in finance and banking from Warsaw School of Economics, and an MSc (Eng) from Warsaw University of Technology. He did research into condensed matter theory using high-performance computing to gain a PhD in physics from the Polish Academy of Sciences.

Dmytro Kaidalov, PhD, Research Fellow
Dr. Dmytro Kaidalov is a cryptographer and a software developer; he graduated from Kharkiv National University of Radioelectronics with a master’s degree in Information Security. In 2016 he defended his PhD work in the area of symmetric cryptography; he has a master’s degree in Software Development from Linnaeus University in Sweden.

Christian Seberino, PhD, Education
Dr. Christian Seberino is currently an adjunct professor as well as an instructor for computer programming, mathematics and science. He is also a developer with over 20 years of experience. He has done classified cryptography work with the NSA and worked with many other government agencies and corporations such as Google; he has a PhD in Theoretical Physics fromt the Univ. of California, San Diego.

Lei Hao, PhD, Director of Chinese Operations
Dr. Lei Hao is an expert on technology and communication, holding a PhD in media and communications from Goldsmiths, University of London; he is an entrepreneur with extensive experience helping overseas blockchain projects navigate the complexity of China’s digital ecosystem.