The Bank of Lithuania has released a statement of its plans to release the world’s first digital collector’s coin in the spring of 2020.

This coin is a commemoration of Lithuania’s 1918 declaration of independence and will feature all the 20 signatories. According to a press release by the Bank of Lithuania, every coin will contain one of the twenty signatories. The total number of coins slated for this release is 24,000 and they will be divided into six groups to represent the areas of activity by the signatories.

According to Giedrius Paulauskis, the coin designer, there will also be a silver coin which will look like a credit card and have a symbolic denomination of 19.18 euros. This coin will have a digital image of the council of Lithuania. It will be about 35,500 in pixels. However, one does not just get to receive this physical coin. There is a process. Buyers should also be aware that the coins they purchase are randomly selected with each purchase. The physical coin is only received when a buyer has collected tokens from the six different categories of the signatories.

This coin will not be used as a legal tender and therefore will not be in circulation. It is a collectible that is sold exclusively on the central bank’s online store. 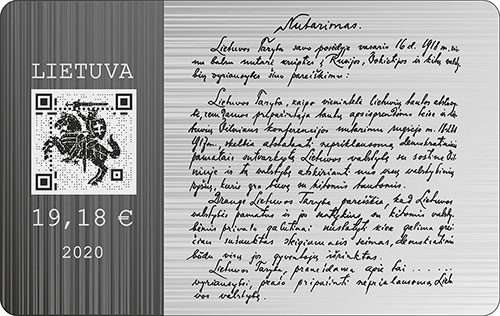 The bank in its official statement said that this was a strategic step in innovation and fintech that will also see the youth become involved in collecting.

This is the first move for Lithuania when it comes to joining other countries in the central bank digital currency shift. China is currently at the top of the race and even has a pilot scheme in the pipeline.

The People’s Bank of China, PBoC started the crypto-asset payment system in 2014 even though there has never been an official launch. News reports suggest a possible launch of a pilot test in Shenzhen and Suzhou. There are big names coming on board including Huawei. This will be a small scale test in which further testing will be done in 2020 towards establishing a digital yuan.

In its press release, the Bank of Lithuania stated that this project would be an invaluable experience and enhance knowledge in creating digital currencies.