Malta-based cryptocurrency exchange Binance is pledging to support ailing Australia through its ongoing bushfires tragedy by launching and running a charity campaign to raise funds to support the efforts of stopping these fires and rehabilitating the affected parties.

As part of this effort, the leading crypto exchange has announced that it will donate a million US dollars’ worth of its native platform token the Binance coin [BNB]. In an announcement on Wednesday, Binance through its charity arm Binance Charity Foundation stated that all the funds will be donated to the Australia Bushfire Donations project to be used to “help alleviate the impact of this disaster and facilitate the restoration afterward.”

The Australian bushfires have so far consumed about 10 million acres of land razing all vegetation and forests on their paths. In a statement, Binance CEO expressed his support for the charity benefit and his sympathies towards the affected victims. He said that,

“It is painful to see the bushfires burning across Australia as well as the devastating effects on the ecology and the local community. We want to help this urgent crisis […] Donating for the Australia Bushfires charity program is the most direct and effective approach to make an impact, and we are also calling for the whole crypto community to join us in supporting Australia.” 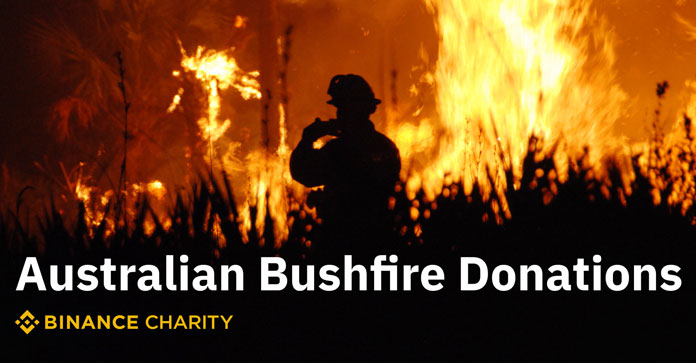 Through the BCF, Binance is encouraging other able parties to contribute towards the benefit.

“We will reach out to as many local organizations and communities as possible to pass on the donations we receive in crypto to the hands of each beneficiary,” said Helen Hai, who heads the BCF arm. “We feel for the people who have suffered losses in this natural disaster and we strongly want to do our part to help. It is also the original intention we had when we created this platform which is to use technology to empower people and to help those who need it the most,” she added.

Binance Charity Foundation was established in October 2018 with the aim of improving transparency in the charity sector. Since its launch, the BCF has directly impacted more than 100,000 people. The foundation has also partnered with strategic institutions in the sector such as Mercy Corps and Women’s World Banking with the aim of exploring the use of blockchain within the charity sector.