The World Economic Forum that concluded on Friday last week was a hot pot where policy makers laid out their plans.

Aside from the usual camaraderie from some global leaders hugging and clashing on different fronts as far as policy and approach is concerned, news that Ripple Inc., the $10 billion company with strong interests in global remittance, may be planning to go public in coming years, issuing shares and subsequently being under US Securities and Exchange Commission (SEC) rules and regulations, had a mixed reception.

XRP Could Dump to Zero

And there was nothing new about that. Back in 2017, Brad Garlinghouse, the CEO of Ripple said once there was strong infrastructure and the company capitalized, they may opt for an initial public offering.

Critics are adamant that this is totally unnecessary and as a blockchain company, diverging away from blockchain principles of decentralization and freedom is some sort of an antithesis.

Some took to twitter to express their dissatisfaction on the announcement. They argue that XRP could dump to zero as the coin would have no utility even as a speculative asset.

Yet others were pleased and if they do opt for an IPO in the future, investors would have a chance to invest in one of the most promising Fintech companies in the world.

Besides, say Ripple Inc. aim for $5 billion and manage to get even half of that, then it would have a strong foundation and can market their superior services to the masses at prime times, effectively competing with established companies.

Programmatic sales of XRP will also most likely reduce therefore prices will probably correct higher to the delight of holders. 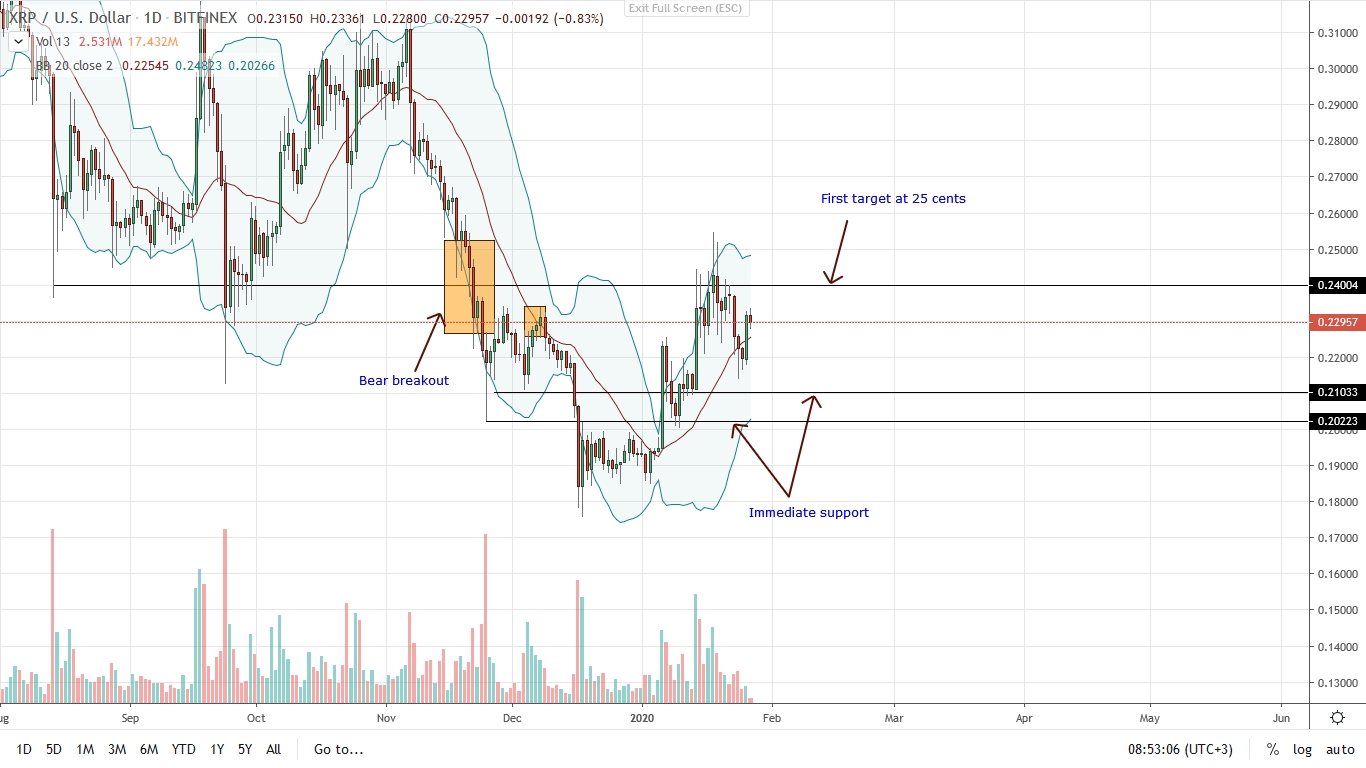 Price-wise, XRP prices are stable and range-bound. Week-to-date, the price is down roughly 2% registering but pretty stable in the last 24 hours.

The main trend is bullish and following last week’s correction, the emergence of support at the 20-day Moving Average, or the middle BB could signal the beginning of trend resumption.

Also, prices are consolidating inside Jan 14 bull bar. This, from an effort versus results point of view, is bullish and a strong signal of lower-time frame accumulation.

Aside from the reaction at the moving average, XRP bulls are also finding support at the 38.2-61.8% Fibonacci retracement levels meaning if bulls build on yesterday’s gains, odds are XRP could rally back to this month’s highs of 25 cents.

Because of this, risk-off traders can buy the dips and target 25 cents as aforementioned. Fitting stops should be below Jan 14 conspicuous bull bar at 21 cents.