Ripple has entered the Egyptian market via an agreement with the National Bank of Egypt, the oldest bank in the nation. This is part of a concerted effort by Ripple to offer financial solutions globally. With the agreement, Ripple has expanded its solutions to one more county.

According to a local media report, the agreement will make it easier to initiate remittances into the nation. This agreement makes the National Bank of Egypt the first bank in the country to offer blockchain-powered financial solutions for remittances.

Egypt is the fifth largest remittance market globally, which makes this a very significant deal. It might transform the Middle East and North African remittances market. According to Naveen Gupta, the company’s Managing Director for the Middle East and North Africa, this agreement is part of a move by Ripple to expand into the region. He added that this was an indication that the National Bank of England was ready to embrace a new system of remittances powered by the blockchain.

The Vice-Chairperson of the bank, Dalia El-Baz, spoke about the benefits this deal will give the bank. He said that this move would enable the bank to improve its liquidity management and increase its foreign currency earnings. A recent report indicated that the Egyptian remittance market would be worth $20.5 billion in transaction volumes by 2023. The report said that growth in the banking population plus the growing number of mobile users would affect the growth of the market positively.

Another potential impact on the growth of the market was cited as government regulation. It notes that clarity on regulation and transparency in the fees charged would have a positive impact on growth. The report noted that Saudi Arabia, which is a major source of remittances for Egypt had created regulation to encourage the hiring of locals. This could potentially affect remittances negatively.

If we go back a few years, Egypt made a decision in 2016 to begin “floating its currency.” This means their currency ( Egyptian Pound ) was devalued against the U.S dollar. A simple calculation will show that $1 USD is equivalent to almost 16 Egyptian pounds. The floating of their currency was initially executed to stabilize the economy, meet foreign exchange demands, and increase foreign currency inflows. Based on Egypts sources of foreign currency, Ripple has the potential to revolutionize their economy.

Despite the data being a few years old, a report by PWC showed that remittances accounted for more than 30% in sources of foreign currency to Egypt. Ripples solution sets around liquidity and remittances could help fuel Bank of Egypt operations. 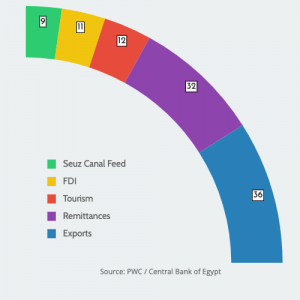 With the addition of Ripple, this opens up the door to RTGS / SWIFT competition. Ripple CEO Brad Garlinghouse has come out multiple times stating that they will take significant market share from SWIFT. The agreement with Egypt could put them in the position to do so. The Central Bank of Egypt did not reference 2019 annual reports on their site, but according to an annual report from 2017-2018, SWIFT / RTGS accounted for about $18 billion in foreign currency transfers. 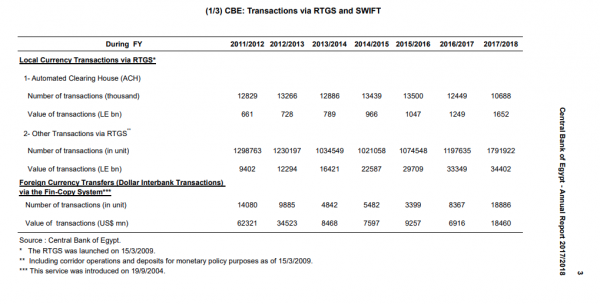 Ripple has also been focusing on South America. About a week ago, the company signed an agreement with International Money Express Inc. Intermex has a huge presence in the region and this move is going to be great for Ripple.

Ripple’s business model has been working quite well. It helps make remittances in near real-time compared to the current system, which takes days. Coupled with the security of blockchain technology, the financial system is headed for a major overhaul. Recently SBI holdings published a report that was extremely bullish on Ripple. This news appears to have been quite positive for Ripple, whose price has continued to grow.

It will be interesting to see the long-term results from this deal for Ripple. Movements like these will catch the attention of other large banks globally. Due to regulatory demands, banks haven’t always placed a premium on innovation. As FinTech and innovation in payments continue to grow, deals like this will make it easier for other large financial institutions to assess market opportunities.

The information has been obtained from sources we believe to be reliable; however no guarantee is made or implied with respect to its accuracy, timeliness, or completeness. This material has been prepared for informational purposes only. This Article was sourced from Visionary Financial . Visionary Financial and its affiliates do not provide investment, tax, legal or accounting advice.

The post Ripple Could Take Billions From SWIFT Through National Bank of Egypt Deal appeared first on NullTX.