Blockchain is all about development and collaboration. And Ripple is obviously active on the partnership front. Fronting three options that bear numerous advantages over legacy systems since they are based off a progressively decentralized ledger, Ripple has so far attracted more than 300 banks and financial institutions.

However of note is the progress registered by SBI Ripple Asia and their recent collaboration with Tien Phong Bank (TP Bank) of Vietnam.

In the deal, SBI Ripple Asia, SBI Remit and TP Bank would collaborate, allowing for low-cost, faster and convenient remittance to and from Vietnam.

Interestingly, TP Bank had previously announced their desire of expanding their remittance services to other nations after their successfully laying out a blockchain-based service in Vietnam.

Announcing this partnership, a statement from the bank’s CEO Nguyen Hung read:

“Our cooperation with SBI Ripple Asia Co., on the application of blockchain technology in cross border money transfers marks an important turning point in enhancing our customer experience and makes international money transfers via TPBank faster, more convenient and safer than ever before.”

This is a major boost for TP Bank as the popularity of Vietnamese residents in Japan has risen more than four folds.

To that end, Yoshitaka Kitao has expressed his desire to exploit the booming economy by pushing the adoption of RippleNet. 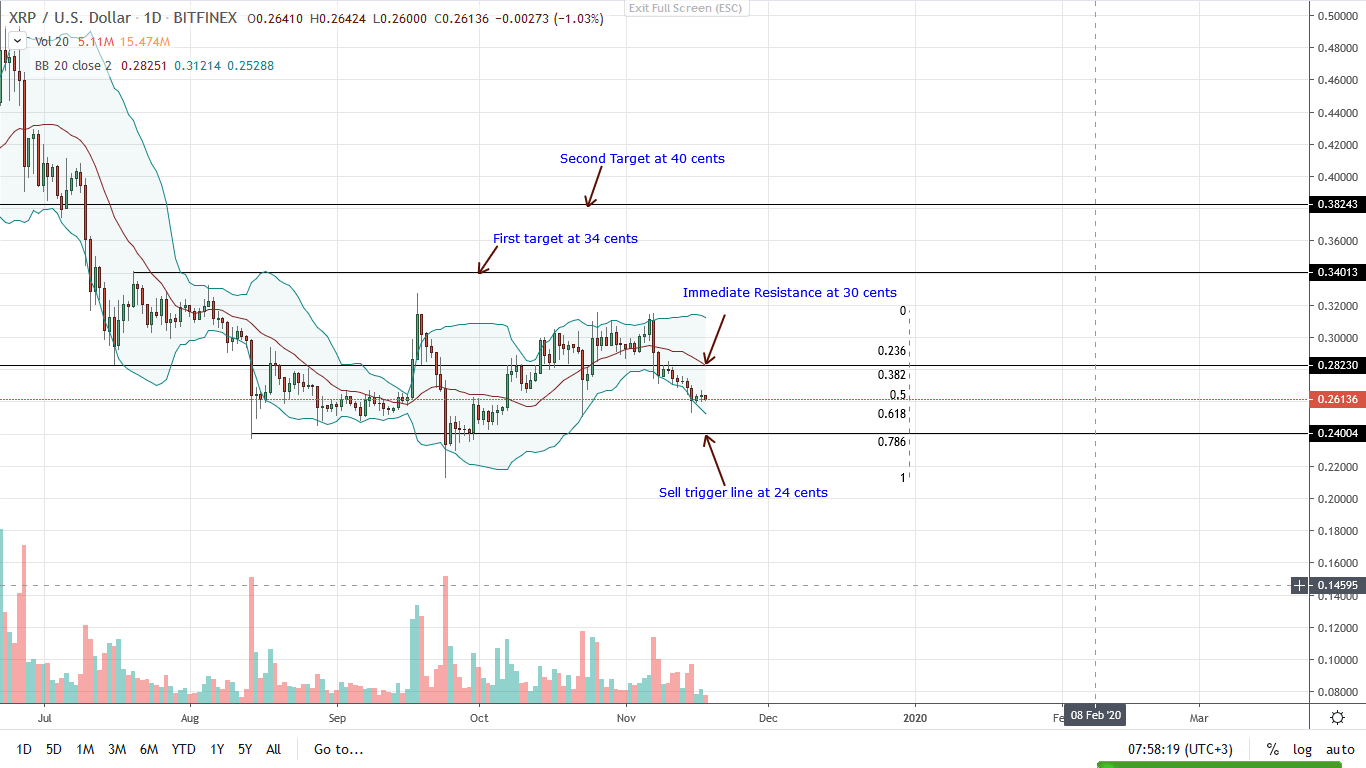 Despite this positive development, XRP is down against the USD, ETH and BTC in the last week and day. To quantify the losses, XRP is down 7.55 percent versus the greenback but relatively steady against the BTC-which is also on a downtrend, losing 1.66 percent week-to-date. Even so, there could be reprieve for XRP holders.

First, XRP slide is slowing down, finding support at Oct 23 climactic lows of around 25 cents. This is the upper end of the support zone of around 23-25 cents.

The level also coincides with the 61.8 percent Fibonacci retracement level of Oct trade range meaning XRP prices could edge higher in days ahead.

Also, in the last three days, not only did Nov 15 candlestick close with a long lower wick but subsequent bars closed with higher highs, away from the lower BB. Combined, there are hints of demands and XRP could rise to 30 cents beginning this week.

The best course of action for traders is to wait for the total reversal of Oct 23 losses as a 3-bar bull reversal pattern prints out.

In that case, risk-off traders can buy the dips and aim for 30 cents with a fitting stop loss just below Oct 23 lows of 25 cents.

Conversely, sharp losses below 25 cents could see XRP slide to 20 cents or worse in days.