Ripple [XRP] Price Analysis: Price Broke above the 20-day MA for the First Time in 60 Days

There is no doubt that XRP, the native currency of the Ripple Ledger that also happened to be the third most valuable digital asset after Bitcoin and Ethereum, was one of the worst performing assets in 2019.

For perspective and just to paint a picture of how rough it was for investors, the coin tumbled from highs of 37 cents in early 2019 to lows of around 17 cents in December.

That was totally unexpected because at its height, the coin’s utility especially its use as a bridge coin and a liquidity provider for bankers who opt in and incorporate on-demand liquidity in their operations was seen as a net positive and another reason to amass the coin.

However, that has not been the case and even though the fanatical and sometimes dreaded XRP Army continues to support Ripple Inc. and the coin, investors have been on the receiving end. Nonetheless, at the end of last year, Ripple surpassed their goals and more banks continued to connect to the RippleNet, slashing costs and improving efficiency.

Going forward, the back and forth movement of XRP from Ripple Inc.’s controlled escrow accounts will be a source of discourse and even doubt on whether the for-profit company is “dumping” on holders and deliberately depressing XRP prices or on the path of increasing their reach and focusing on zones—MEEA and SE Asia, with high potential. 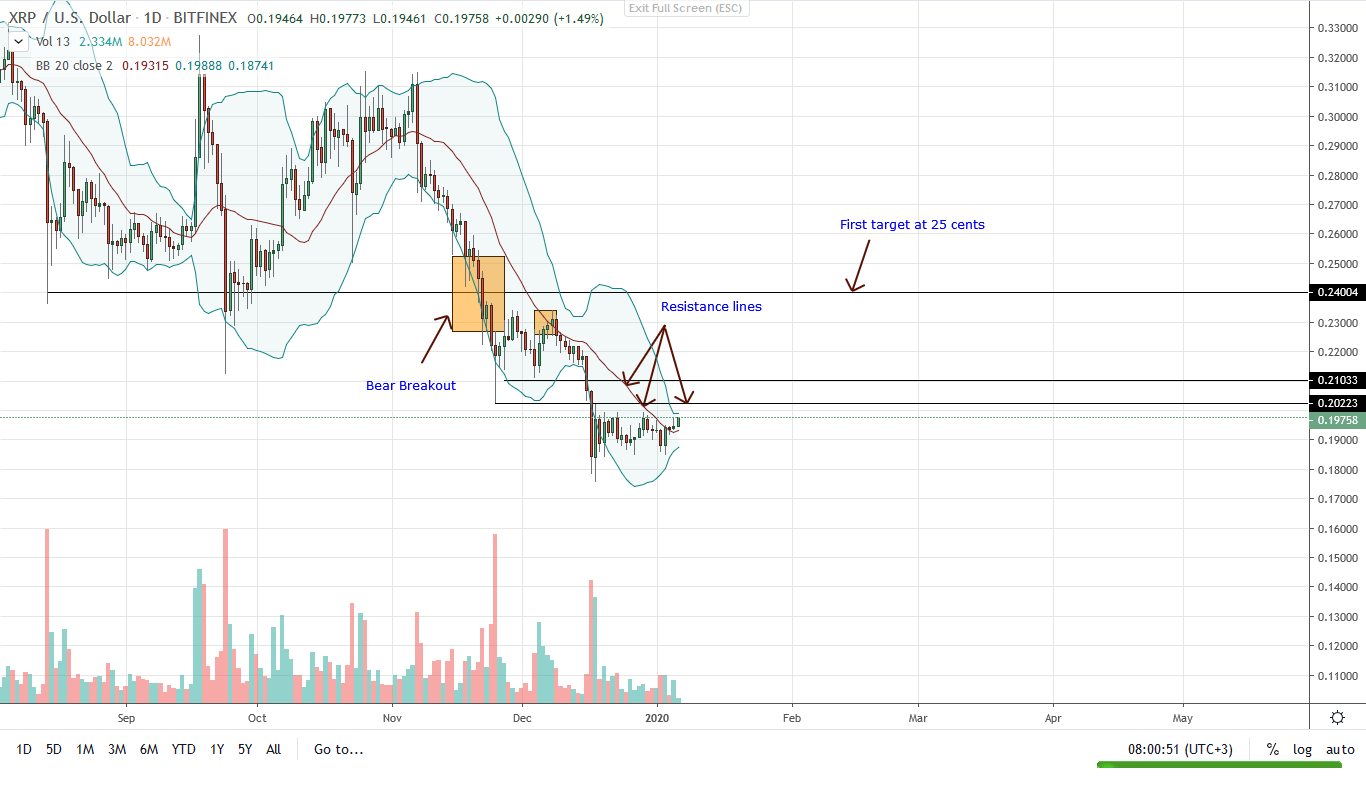 Price wise, XRP seems to be steadying and likely to gain against the USD judging from candlestick arrangement. Scoring against the USD week-to-date, XRP prices are treading above the 20-day MA for the first day in more than 55 days.

Technically, that is bullish and a lift-off from Dec 2019 lows that may spur further gains in days ahead. From the daily chart, buyers are in control and building on from the under-valuation of Dec 18.

A correction, it will be nonetheless imperative for prices to firmly close above 21 cents or recoup Dec 17 losses before risk-averse traders buy the dips with first targets at 25 cents and later 40 cents.

The failure of prices to recover above these immediate resistance may pave way for bears to flow back since from an effort versus results perspective, sellers still have the upper hand.

Prices, despite the revival in the tail end of 2019 have failed to comprehensively close above 21 cents and reverse Dec 17 losses, a sign of weakness meaning this week’s revival could be a temporary pullback and another chance of liquidation if bulls are rebuffed from the 20-21 cents zone.

The post Ripple [XRP] Price Analysis: Price Broke above the 20-day MA for the First Time in 60 Days appeared first on Crypto Economy.